NEW YORK, Oct. 3, 2019 /PRNewswire/ -- Inspired Entertainment, Inc. ("Inspired") (NASDAQ: INSE) today announced it has signed a worldwide exclusive brand partnership with legendary hockey star Jaromir Jágr.  Pursuant to this partnership, Inspired, a leading provider of Server Based Gaming, Virtual Sports and Interactive Gaming, expects to use Jágr's image and likeness in its gaming products for the virtual sports, casino and lottery sectors, as well as digital variants for online and mobile. 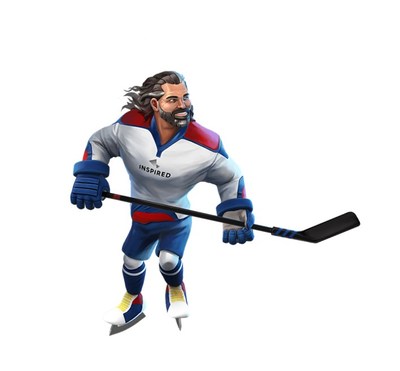 Jaromir Jágr is an Olympic gold-medal winning professional ice hockey player who's made history as one of the most prolific point scorers in National Hockey League ("NHL") history.  Over the course of his 24-year career he has played for the Penguins, Capitals, Rangers, Flyers, Stars, Bruins, Devils, Panthers and Flames.  He has won two consecutive Stanley Cups and individually received the Art Ross Trophy as the scoring champion five times, the Lester B. Pearson Award for the NHL's outstanding player as voted by the NHL Players' Association three times, and the Hart Memorial Trophy as the league's most valuable player.  He is considered one of the greatest professional hockey players of all time and is one of only 29 players in the Triple Gold Club, having won the IIHF Ice Hockey World Championship, the Olympic Ice Hockey tournament and the Stanley Cup.

"I am very excited about this partnership and the opportunity to be the face of Inspired's suite of hockey gaming products," said Jaromir Jágr.  "I have been increasingly impressed with their creativity and innovation in using live action to establish themselves with leading edge technology in Virtual Sports.  I've done almost everything imaginable on the ice in my hockey career so I can't wait to see the breakout plays that Inspired puts together for Virtual Hockey."

In addition to being the talent behind Inspired's upcoming Virtual Hockey game, Jágr is expected to become the face of the Company's new slot game 'Jágr Super Slots', expected to launch later this year throughout its global customer base, and be featured in its live action penalty shoot-out game and bingo game that are under development for anticipated release in 2020.

"We are thrilled to announce Jaromir Jágr as the face of Inspired's newest suite of games," said Brooks Pierce, President and Chief Operating Officer of Inspired.  "With an impressively long and successful career, Jaromir is one of hockey's greatest performers and personalities. Jaromir's fans will appreciate the realistic quality of the action and imagery in all of the gaming products we are creating."

Many of these new Jágr-inspired products will be showcased at the Company's booth at the Global Gaming Expo (G2E), the largest gathering of global, commercial and tribal gaming professionals in North America, October 15th to 17th at the Sands Expo and Convention Center in Las Vegas.

To celebrate this new brand partnership, Jágr will be making a VIP guest appearance at Inspired's G2E booth #4130 on Wednesday, October 16, 2019 from 1:00pm PT to 3:00pm PT, where Inspired is bringing content and solutions that demonstrate what makes the company "Essential Entertainment".

About Inspired Entertainment, Inc.
Inspired offers an expanding portfolio of content, technology, hardware and services for regulated gaming, betting, lottery, and leisure operators across retail and mobile channels around the world. The Company's gaming, virtual sports, interactive and leisure products appeal to a wide variety of players, creating new opportunities for operators to grow their revenue. The Company operates in approximately 35 jurisdictions worldwide, supplying gaming systems with associated terminals and content for more than 58,000 gaming machines located in betting shops, pubs, gaming halls and other route operations; virtual sports products through more than 44,000 retail channels; digital games for 100+ websites; and a variety of amusement entertainment solutions with a total installed base of more than 19,000 devices.  Additional information can be found at www.inseinc.com.

Forward Looking Statements
This news release contains "forward-looking statements" within the meaning of the "safe harbor" provisions of the U.S. Private Securities Litigation Reform Act of 1995, including statements regarding Inspired's plans with respect to the combined operations of Inspired and Novomatic UK's Gaming Technology Group ("NTG"), the expected effects of the acquisition of NTG, anticipated effects of the refinancing of existing indebtedness and projected synergies. Forward-looking statements may be identified by the use of words such as "anticipate," "believe," "expect," "estimate," "plan," "will," "would" and "project" and other similar expressions that indicate future events or trends or are not statements of historical matters. These statements are based on Inspired's management's current expectations and beliefs, as well as a number of assumptions concerning future events.

Forward-looking statements are subject to known and unknown risks, uncertainties, assumptions and other important factors, many of which are outside of Inspired's control and all of which could cause actual results to differ materially from the results discussed in the forward-looking statements. Accordingly, forward-looking statements should not be relied upon as representing Inspired's views as of any subsequent date, and Inspired does not undertake any obligation to update forward-looking statements to reflect events or circumstances after the date they were made, whether as a result of new information, future events or otherwise, except as required by law. Factors that could cause actual results to differ materially from those expressed or implied in forward-looking statements include, without limitation:  unanticipated difficulties or expenditures relating to the transaction, including, without limitation, difficulties that result in the failure to realize expected synergies, efficiencies and cost savings from the proposed transaction within the expected time period (if at all); disruptions of Inspired's and NTG's current plans, operations and relationships with customers and suppliers caused by the transaction; potential difficulties in Inspired's and NTG's ability to retain employees as a result of the transaction; unforeseen challenges with respect to post-closing integration; and the other factors described in the "Risk Factors" section of Inspired's annual report on Form 10-K for the fiscal year ended September 30, 2018 and Inspired's quarterly report on Form 10-Q for the quarter ended June 30, 2019, which are available, free of charge, on the U.S. Securities and Exchange Commission's website at www.sec.gov and on Inspired's site at www.inseinc.com.