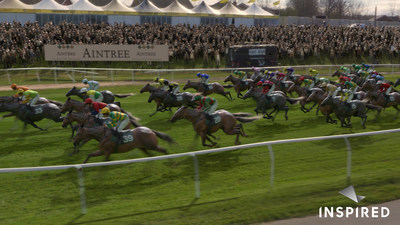 BoyleSports and LadbrokesCoral are the first operators to stream Inspired's Virtual Grand National 2018 race to their customers in advance of the live event at Aintree on Saturday April 14th.  The Virtual Grand National is presented as a dedicated channel of content allowing for a unique virtual racing experience as 40 runners go head to head with all the action of the Grand National. Complex data algorithms allow for unique betting opportunities, larger prizes, and all the thrills and spills of the live race, while HD graphics deliver Inspired's most realistic and sophisticated Virtual Sports race to date.

In addition, both operators are also streaming Inspired's Grand National Race of Champions, which features a field of some of the most successful horses to have raced at Aintree over the past century.  Using cutting edge technology and HD graphics, The Grand National Race of Champions brings famous names from the likes of Red Rum, to Many Clouds, to Amberleigh House, together to virtually compete against each other over Aintree's famous fences.

One in four Britons bet on the Grand National which attracts over 600 million viewers across the world, making it one of the most watched televised sporting events in the calendar.

"I'm delighted to announce the commercial launch of Inspired's Virtual Grand National 2018, as the nation begins to anticipate the greatest horse race of the year," said Steve Rogers, CCO, Inspired.  "This is truly a unique product and it promises to add a compelling experience to our customers' retail and digital channels in advance of the highest profile horse race in the calendar," he added.

"BoyleSports is delighted to be bringing the Virtual Grand National products to its customers in anticipation of the live event this weekend," said Eddie Bennett, MD – Gibraltar, BoyleSports. "The realism and quality of graphics in the Virtual races delivers a premium experience, and I have no doubt that customers will be thrilled by the opportunity to watch Red Rum race again," he added.

"The build-up to the Grand National at Aintree this week is well underway and we're delighted to launch this virtual offering which is as close to the fun and action of the real thing as you can get," said Craig Perry, Head of Gaming, LadbrokesCoral.  "With races every five minutes and the hourly 'Race of Champions', which pits heroes of yesteryear against each other, we're confident this great product will really capture the imagination of racing fans," he added.

Forward Looking Statements
This press release contains "forward-looking statements" within the meaning of the "safe harbor" provisions of the Private Securities Litigation Reform Act of 1995. Forward-looking statements may be identified by the use of words such as "anticipate", "believe", "expect", "estimate", "plan", "outlook", and "project" and other similar expressions that predict or indicate future events or trends or that are not statements of historical matters. These statements are based on Inspired's management's current expectations and beliefs, as well as a number of assumptions concerning future events.